Start a Wiki
"They'll sneer at you because you're nothing to them. That's the point where you must show them that nothing is still 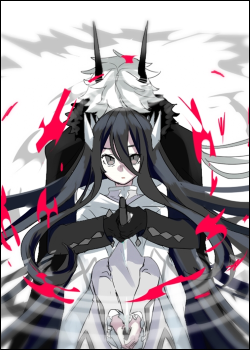 Adelaide Lucille Hirano was a Descendant of Naberius born just before the formation of the Republic. Her first footings were as a Princess of Tilandre, royalty alongside of Avrill Eldor-- her twin brother-- before the dissolving of the monarchies that ruled over Valmasia. It was no secret what-so-ever that she was one of the most prominent Occultists of her time, and this was certainly something that gave her an incredible amount of struggle throughout her life. She was the daughter of Alexandra Eldor, the Crimson Queen of Tilandre, and Jerudiel Melym, the Warden of Brighthold. At one point, she held the title of Queen of Nostvale, working alongside her husband Lucien Hirano.

After the dissolving of the monarchies within Valmasia, the young woman found herself a target of implantation that had befallen those that practiced Occultism all across the country. With many people telling her that she'd become nothing more than a copy of her mother, it slowly drove her to madness. This madness, however, was not a side effect of the Occultism harbored within her body. It only grew further inside of her head once the Occultism supressing implantation was imposed upon her.

And thus, she grew. Her morality: As gray as they came. By day, the young woman smiled in the faces of the Council that imposed this treatment upon her, even going as far to single handedly fight the White Testament. By night... She worked by raising the imperfect, Arimanes Luxuria, to prominence within the land.

Despite such a skewed set of actions, the woman became the pioneer of a technique labeled as Zero Occult. And much to the dismay of those within the land, she secured the title of Paladin of Valmasia and was the chosen of the blade Almace by debuting her new technique to the world in the 29th Grand Tournament. Though not known to many, however, the woman was working to rebuild Azrael's original staff: Morning's Dew and she aimed to make it her weapon of choice above all else.

The details of her death are sketchy at best: Some say that Arimanes killed her, and others say that Lucien Hirano ended her life. Her body had been clung to by her husband, though it is hard to say what has happened with the once Champion of Valmasia now.

As far as the citizens of Valmasia are concerned, however, she died a hero and was regarded as such by High Chancellor Demeter Rosengard after her passing.

"For someone that boasts being emotionless so much, you seem to have a lot within you." - Annabelle Eldor

To be filled in.

To be filled in.

Retrieved from "https://eterniaroleplay.fandom.com/wiki/Adelaide_Hirano?oldid=7623"
Community content is available under CC-BY-SA unless otherwise noted.