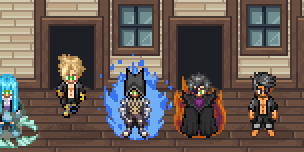 "And, of course, he created mankind in the image of angels, but designed to be an improvement--they were not pure, no. But they were able to learn from their mistakes. My kind, you see, can only fall to darkness should we commit sin--we have to retain ourselves through the centuries or risk becoming a Fallen One." - Gospel of Althus, The Book of Kraus.

Humans are the primary inhabitants of Eternia, created by the Archangel Kraus in his image to populate his new world. Humans are blessed with free spirits and the ability to practice and master the gift of Magic. The term Human has become analogous in Valmasian culture to simply lacking any "cursed" or "mutated" blood, such as the Drakanites and Ookami.

Humans have been revered as unpredictable creatures of awesome potential by many, and often are feared by the non-humans of the world.

To date, the most important and powerful humans in Valmasia have been Arthor Pendragon and Lysterg Amori; High Kings of divine power.

When the Archangel Kraus came to the world of Eternia he first created the humans, men and women created in Kraus's image. Though they may not be the most powerful of races, they are undoubtedly the most plentiful; outnumbering most if not all of the other races. This has lead to a common sense of superiority running through many humans, proclaiming themselves to be the true children of Kraus and rightful rulers of the world.

Although a bit headstrong, they are quite resilient when the time calls for it. During the War of Divine I, humanity fought alongside Azrael to secure their freedom against totalitarian order of the Divine Council, a heavenly congress dedicated to ruling Eternia and Avalon in Kraus' unforseen absence.

After the initial seeding of Human life, they migrated to the furthest reaches of Eternia to conquer the lands for their own gain. They exist in almost every continent of the world as the dominating force.

All humans (and indeed most sub-humans) share a similar physiology: one head, two arms, two legs. The body is composed of both spiritual and physical aspects, the physical ones being common organs and limbs. The spiritual aspect of the human body is composed of what is known as the Magical Circuit or Spiritual Circuit, an invisible structure that exists all around the body with the sole purpose of carrying mana. This circuit behaves in a similar manner to that of the cardiovascular system, delivering Mana to where it is needed. It is also linked directly to the Brain, which regulates thought, memories, and personality. The brain is thought to serve as a spiritual "tether", linking a human's Soul to their body. Thus, when the brain is destroyed or ceases function, both the spiritual tether and mana source are severed and the human is considered dead. For not only does a human need a soul to be considered alive, they also need mana - as does all life.

The Magical Circuit is interconnected with the Endrocrine System, which regulates the body's hormones. When a person consciously (or Symbolically through emotion) channels mana through their body, it has the effect of amplifying the physical potential. If trained and mastered, a human is capable of using mana concentration to double or even ten-fold their natural strength and agility in short bursts.

Humans have many appearances, with skin tones ranging from light and pale, to extremely dark, hair varying with different colors both natural and artifical and eyes with a variety of hues.

Although only about 2% of humans are either born with the gift of magic or train to wield it, all humans are born with at least a deep, unlocked affinity for the arcane. To the magic of Yokai and other strange beings, humans have been able to conquer every form of magic they discover except the elusive and dangerous Divine Magic.

Human culture depends highly on geography, due to varying population densities and environments no one singular culture exists within Eternia. One thing that many humans share however is a belief in Kraus, the all father. Peace Barriers exist around all major countries as a means of separating them, therefore contact with foreign populations is mostly unheard of in Valmasia and perhaps all around the world.

Retrieved from "https://eterniaroleplay.fandom.com/wiki/Human?oldid=7568"
Community content is available under CC-BY-SA unless otherwise noted.